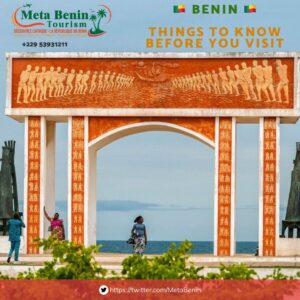 Benin was the cradle of the voodoo arts and played an important part in the growth of the African
slave trade. In the African country’s history, these two things are only a small part of the equation.

Benin is a small country with only a few big cities, but it begs to be explored and rewards its
visitors with museums, beautiful architecture, and markets that are truly memorable, so it’s worth
the trip.

Benin’s natural beauty also has a lot to offer tourists who come to see it. You’ll find everything
here, from palm-fringed Atlantic beaches to elephants, lions, and other exotic animals in the
national parks, not to mention uncommon bird species.

While Benin is located in an underdeveloped part of Africa, it is amazingly well-suited to tourism
and is truly an untouched location. In comparison to other African countries, the roads are in good
condition and the facilities for tourists are superior.

As Benin is still a relatively new tourist destination, it will seem like a great adventure to visit the
country. To get a taste of Africa, Benin is a terrific place to start because it has it all: excellent
wildlife, beautiful beaches, hospitable locals, and a welcoming atmosphere for tourists.

Tourists before used to go to France to view Benin’s historical arts, but now they will have to
come to Benin as the 26 looted treasures are back to their origins and that’s really exciting.

The 26 artifacts, which were taken by French forces in 1892, were on display at Paris’s Quai
Branly museum in the run-up to a ceremony.

The decision to give them back comes after a lot of people in Africa had asked European
countries to return colonial loot that is kept in museums. It was part of President Emmanuel
Macron’s effort to boost France’s image in Africa, particularly among young people. This
collection of valuables came from the kingdom of Dahomey, which is located in the south of
present-day Benin. It included the throne of Dahomey’s last king, Behanzin, three totemic
figures, four palace doors, several portable altars, and three warrior dance staffs, among other
things.

Benin is currently Africa’s most safe and secure country. There is no crime, most businesses are
open 24 hours a day, and public transportation is available at all times. The current government is
stringent when it comes to public safety, and as a result, robberies and other forms of theft are no
longer frequent.

Speaking about the cities in Benin, Malanville is around 35 kilometers away from Karimama on a
rough and ready dirt road which provides a great part of the experience in Benin to visit, and it is
worth the trip. Perhaps the best method to manage the journey is to take a taxi since it is completely
thrilling. Despite the fact that some locals believe that the chicken and chips served by the Niger
River Bridge are equally worth mentioning, the marketplace is the most popular tourist destination
in Benin. In addition to Malanville, there are a number of nearby villages that are fantastic places
to visit if you want to get away from the tourist map during the tourist season.

Despite the fact that the country’s capital is located in Porto Novo, Cotonou is considered the most
important location in the country. This is due to the fact that Cotonou is the center of economic
and social activities, making it the perfect location for tourists to go out and unwind. One site to
visit is the museum, where you may learn about the history of the monarchy over the years.

For those who aren’t particularly interested in history, the Boulevard St. Michel is a good place to
go. This place is also very popular with tourists because it looks a lot like Paris at night.

Because Porto Novo is the city’s capital, there is constant hustle and bustle throughout the day. To
begin your exploration of Porto Novo’s stunning attractions, begin at the Porto Novo Museum of
Ethnography. Here, you’ll be astonished by the enormous collection of Yoruba masks, as well as
the city’s and Benin’s history. The Musée Honmé, commonly known as King Toffa’s Palace, is a
great place to learn about life as an African royal. This isn’t all: you could also go see a palace or
a palace for governors and find out more about how the country is run.

Grand-Popo on the other hand, has an unusual history, owing largely to its pivotal role in the slave
trade. The village is awash in African beauty, and the locals are welcoming. An hour’s drive from
Cotonou, this small town is a great break from the city. The town has numerous backside hotels
and resorts, and the beaches are ideal for relaxing and swimming. The nearby Mono River is a
great place to go for a walk and see mangroves and unique bird species.

For over 300 years, beginning in the 17th century, Abomey served as the capital of Ancient
Dahomey. The city’s primary draw and reason for visiting are the Abomey Royal Palaces, a Unesco
World Heritage Site. Although the palaces have been entirely destroyed and are in a state of ruin,
the location retains immense historical significance, and the stories of the kings who previously
stayed here are interesting.

Visiting a tourist spot by yourself might not be a good idea as you cannot explore it the way it’s
meant to be. A local company that guides you all the way can make you explore in a much better
way as they can show you many hidden gems which are not mentioned in the media. As it has
been discussed earlier that there are many unexplored heavens. Visit www.metabenin.org to get
the best and cheapest offers available in the market. Their staff of travel professionals
understands how to communicate with you in order to obtain your desired outcome. They can
have you covered from the moment you contact them until the moment you return.
They can alleviate stress by collaborating with you to develop a travel plan that is tailored to
your specific needs. Packages are made to fit your needs and preferences, so you need to be
involved to make them work.

Their travel specialists deliver suitable services to you, from initial inquiries to finalizing your
flight arrangements. They tailor their suggestions to your budget in order to help you learn about
the best places and activities in Benin.

Bohicon is more of a site to pass through than a destination to spend an extended period of time.
Although the city is virtually entirely modern, it is well worth touring the bazaar, which is arguably
Benin’s largest and finest. The contrast between the bustling bazaar and the relative serenity of
Abomey is startling. The bazaar’s most fascinating hours are in the mornings, and these should be
avoided if possible (unless, obviously, you do well in the chaos).

Because of different historical events, Ouidah has a blend of French and Portuguese influences.
The city is around 40 kilometers from Cotonou and, in comparison, is more easygoing. If you have
an interest in African history (which you should), this city should be at the top of your list. It is
home to magnificent museums dedicated to slavery and voodoo. If history becomes too much for
you, Ouidah also has other gorgeous beaches to relax on. During the 18th century, Ouidah was a
major location for the slave trade. It was one of the places where slaves were taken to America
before they were sold. The point at which enslaved people began their voyage to the New World.
The Old Portuguese fort, which has been converted into a museum, transports us back to one of
history’s most unforgettable episodes. There is a slave road leading to the “Gate of No Return” that
was walked by chained men, women, and children.

When you visit Benin, you should make a stop in Natitingou, which is only 50 kilometers from
the Pendjari National Park. The city also has its own attractions that make it a good place to visit.
The city has its own museum, which is housed in a French colonial building and chronicles the
Somba people’s way of life. Natitingou, in fact, is a great spot to view how the Somba people live
and build their homes. Natitingou is also an excellent location to witness the production of shea
butter.

This lovely hamlet is an excellent location for viewing colonial French architecture in Benin.
Tanguieta has a tiny population: approximately 20,000 people live there. Tanguieta also has a
lively market, but not as lively as Bohicon’s. It’s a good place to start if you want to see the Tonogou
Waterfalls or the Pendjari National Park, which is home to lions, hyenas, and elephants.

Benin is one of the best places to visit in Africa for so many reasons. First of all, it offers everything
from culture to history to amazing scenes and weather variations. While your friends will be
posting pictures of the same tourist places that everyone visits, you can own the social media by
posting unexplored places. Come to Benin and experience amazing places and the amazing
hospitality of people.